Artificial Intelligence – the Rise of the Machines?

Home Our Blog Artificial Intelligence – the Rise of the Machines?
Share this page

Artificial intelligence is one of the most important accomplishments of the last thirty years. In one form or another, it touches every single one of us in our daily lives. Whether that be voice recognition through Amazon’s Alexa and Google’s Home, facial recognition technology when using smartphones, virtual assistants, or virtual customer support, all these things are additive and helpful to the way we live our lives.

There is a massive amount of excitement around artificial intelligence and a considerable amount of angst.

Are machines going to make our lives easier?

Will AI take our jobs?

Is it possible to invest in AI?

Before we answer the above, let’s think about how artificial intelligence has developed. Scientists have been thinking about this subject since the mid-20th century. When computers were first invented, they barely could do anything other than simple calculations and then only with the extensive assistance of a human operator. One of the critical turning points in the evolution of artificial intelligence was the creation of “Deep Blue” by IBM. Deep Blue managed to use its incredible processing power at the time to beat Gary Kasparov at the game of chess.

To give you an idea of good Kasparov was, he was ranked world number one for 255 months of his career from 1984 to 2005. Deep Blue played two matches v Kasparov, the first in Philadelphia in 1996 and the second in New York City in 1997. Before both matches, the expectation was that Deep Blue had no chance of winning, and the machine lost the first set of games. But incredibly, it won the second set, by quickly analysing a huge number of potential moves and understanding its opponent’s pattern of play. The machine amazed the world with its ability.

AI in the Future

Since that milestone, artificial intelligence has improved by leaps and bounds, and this will continue.

Positive effects will be constant efficiency gains in the workplace. AI can take over dangerous or repetitive tasks. According to PWC (1), AI could replace 7m jobs in the workplace by 2037; however, AI as an industry will create job openings, albeit with different skills needed. As AI becomes more important, the amount of human capital required will only increase, supplying an upsurge of employment. The graph below illustrates the AI industry’s incredible growth and how it has grown within individual sectors. 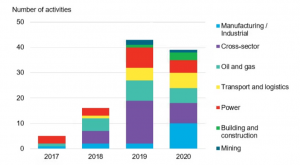 An example of a sector that will really benefit is Healthcare. Better monitoring and diagnostic capabilities mean AI could offer personalised treatment and drug protocols and give providers better access to information across medical facilities. Also, AI will save money. One estimate is that big data could save medicine and pharma up to $100bn annually.

Could we end up where machines take over everything as seen in the Terminator set of films? Machines right now do not have the higher intelligence levels seen within humans. Machines struggle to understand human emotion. Empathy, kindness, ability to reason, emotional intelligence: These are all characteristics that are exceptionally difficult or even impossible for machines to take on.

Ways To Gain Exposure To This Area?

For those invested in the True Potential Portfolio proposition, you are already invested. Names such as Microsoft, Facebook, Amazon, Alphabet, Alibaba, and Siemens are all world leaders in AI. The reality is that more and more companies will invest and use AI overall, giving everyone more exposure to this theme.

AI will continue to make significant gains with vast levels of investment in this area. It will affect every part of our daily lives, making life easier, and will take over simple, mundane tasks for us all. The sector is a key growth area, a fascinating subject and an area in which we want to be invested.