The genesis for our recent weekly articles has been the UBS Greater China Conference held in Shanghai during the week commencing 11th January of this year. Despite the backdrop of Covid-19, the conference went ahead with local investors attending in person and a virtual audience joining from around the globe, including the True Potential investment team.

These events provide an opportunity to obtain information and insight on many aspects of the global economy, alongside the opportunity to consider future trends, such as those explored in recent weeks. This week we want to highlight several sessions on resetting the US-China relationship.

Several sessions highlighted the challenges of resetting the relationship, especially when the global economy grapples with COVID-19. Additionally, the virus’ disproportionate impact on the US in terms of lives lost (4% of the global population, 20% of global COVID-19 deaths), adds to the difficulty of a policy detente. However, President Biden and his Chinese counterpart Xi Jinping possess the opportunity to reposition the relationship between the world’s largest economies.

Backdrop to US- China Relationship

It is no secret that China’s relationship with the US has deteriorated under the Trump administration. Exacerbating the deterioration in ties was Trump’s use of Twitter to conduct diplomacy. Unconventional to say the least. But did Trump’s confrontational measures produce his desired outcome of a trade balance tilted favourably to the US?

For readers who want a deep dive, and more detail into trade outcomes, the link below to the Peterson Institute provides more insight. We have selected some charts from the document, shown later, to help us explain some key points –

Basically, Trump did not achieve his aim in key parts of his agreement with China. 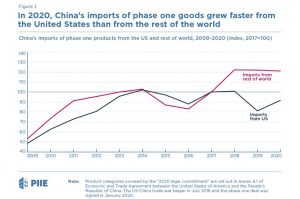 Source: Peterson Institute for International Economics, data as of December 2020 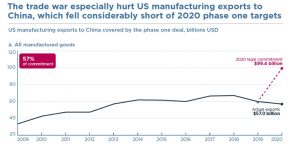 Source: Peterson Institute for International Economics, data as of December 2020

What Now Under Biden?

It seems clear from presenters at the Conference that President Biden will put the trade deal agreed by President Trump under review. It is the only way for him to seek better outcomes for the US and China. However, no one appears to have much faith in immediate change. Most see ongoing difficulties and continued distrust, on many levels. For example,

Further evidence of the challenges occurred this week following reports of Biden’s first call with Chinese President, Xi Jinping. According to US sources, the President expressed concerns about Chinese economic practices, restrictions of freedom in Hong Kong, Chinese actions toward Taiwan and alleged human rights abuses toward Chinese minorities.

However, despite wary posturing, both sides recognise the need to find common ground and have pledged to engage with each other where it makes sense to do so. A need for tolerance reinforced through views expressed at this week’s conference.

A key question being asked is what needs to happen to improve trust in the bilateral relationship between the two countries? Conference participants outlined an approach titled ‘targeted reciprocity’. In other words, cooperation where possible and mutually beneficial for both nations. Tolerance not acceptance in the eyes of the US President.

Trade is an essential area for both countries to engage bilaterally. After all American consumers benefit from lower-priced goods and the Chinese economy benefits from a wealthy consumer market. Healthy competition without unnecessary confrontation would be a welcome way forward and President Biden’s grasp the opportunity within in his hands. His track record highlights the importance he places on foreign policy engagement and the US’ bilateral relationships.

In conclusion, of one thing we can be sure. Diplomatic initiatives will not be conducted on Twitter!